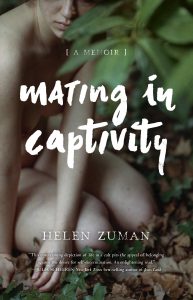 Mating in Captivity: A Memoir

A Harvard grad seeks a mate in a cult that forbids monogamy. To pursue love on her own terms, she must brave exile and learn self-trust.

When recent Harvard grad Helen Zuman moved to Zendik Farm in 1999, she was thrilled to discover that the Zendiks used go-betweens to arrange sexual assignations, or “dates,” in cozy shacks just big enough for a double bed and a nightstand. Here, it seemed, she could learn an honest version of the mating dance – and form a union free of “Deathculture” lies. No one spoke the truth: Arol, the Farm’s matriarch, crushed any love that threatened her hold on her followers’ hearts. An intimate look at a transformative cult journey, Mating in Captivity shows how stories can trap us and free us, how miracles rise out of crisis, how coercion feeds on forsaken self-trust.

Want to buy one or more signed copies directly from the author? Go here.

What others are saying about Mating in Captivity:

“Zendik Farm has long been both mysterious and intriguing. Helen Zuman has given us her wrenchingly personal and deeply insightful story of her time in this most unusual of communes. Others might see the group and their own experience differently, but few will provide a better-written or more probing account of Zendik.” –TIMOTHY MILLER, author of The 60s Communes: Hippies and Beyond

“How timely, how telling this story of an inexperienced young woman who fell prey to a cult because of the abuse to which she’d been subjected by male strangers. Only within the fold, where there were rules protecting the women, did she feel safe enough to explore her sexuality and learn to love. So she surrendered her possessions, her will, her youth. Read Mating in Captivity as a cautionary tale, one I hope will spark a desire to create a better world for our daughters.” –LEAH LAX, author of Uncovered: How I Left Hasidic Life and Finally Came Home

“Helen Zuman was a believer. She believed in the perfectibility of community, in the ability of young dreamers to transform traditional sexual norms by getting back to the land. That Zendik Farm was ultimately exposed as a tyranny built on lies does not destroy the idealism of Zuman’s original impulses; she holds up her youthful self alongside her wiser older self, without useless moralizing, and thereby shows respect for the young people drawn to this cult, while shedding light on the long history of American pastoral communal experiments. She does all this with restraint and wit, and a deft instinct for entertaining incident and character. A page-turner, with purpose!” –PHILIP WEISS, author of American Taboo: A Murder in the Peace Corps

“Like Animal Farm and 1984, Mating in Captivity shows how shared delusion feeds creeping oppression. A keen study of tyranny in microcosm, and the costs of acquiescence.” –RYAN GRIM, author of This Is Your Country on Drugs: The Secret History of Getting High in America

“If you have joined, left, or wondered about a utopian group, you should read Mating in Captivity. Fascinating, disturbing, and ultimately inspiring, this is a brave, honest book.” –MARGARET HOLLENBACH, author of Lost and Found: My Life in a Group Marriage Commune

“Escape from mainstream society and delve into a mysterious cult world. Writer and Beacon resident Helen Zuman did this for real in 1999. Right after graduating from Harvard, she hopped on a bus to Zendik Farm in North Carolina. The Zendiks promised she'd find love apart from 'Deathculture.' But it wasn't until years later that Zuman realized she'd joined a cult. That's when she started crafting her memoir, Mating in Captivity. Read about the manipulation she endured and what it taught her in this unusual, tell-all memoir.” –CHRONOGRAM, Books to Read in May 2018

“Zuman's entertaining depiction of life in a cult pits the appeal of belonging versus the desire for self-determination. An enlightening read.” –JULIA SCHEERES, author of A Thousand Lives and Jesus Land

“Essential reading for anyone curious about what goes on inside a cult, commune, or utopian community, this book is an important, well-written, and riveting account of why a well-educated young woman searching for love, intimacy, and self-discovery ended up in a mind-controlling cult, albeit unwittingly.” –THE ERIC HOFFER AWARD

“Helen is a riveting storyteller. . . . The communities movement would benefit from many more memoirs of this caliber.” –CHRIS ROTH, editor of Communities magazine

“Raw in perspective, this challenging memoir of religious fanaticism never adequately addresses the nagging question: Was Zuman a victim, or did she freely seek the group out because she was looking for the experiences Zendik promised to provide?” –LIBRARY JOURNAL

“[Zuman’s] whip-smart prose…conveys the squalid exuberance of Zendik’s blend of idealism and fraud [in this] engrossing and offbeat story of ideological bonds that chafe—and sometimes liberate.” –KIRKUS REVIEWS (starred review)

“Just as the Zendik community, a cult, pulled Helen Zuman in and held her, her account of her time there will pull you in and hold you. Her clear-eyed observations of her fellow idealists—and of herself—are honest, compelling, and sophisticated.” –DANIEL MENAKER, author of My Mistake: A Memoir