To Build a Sentence 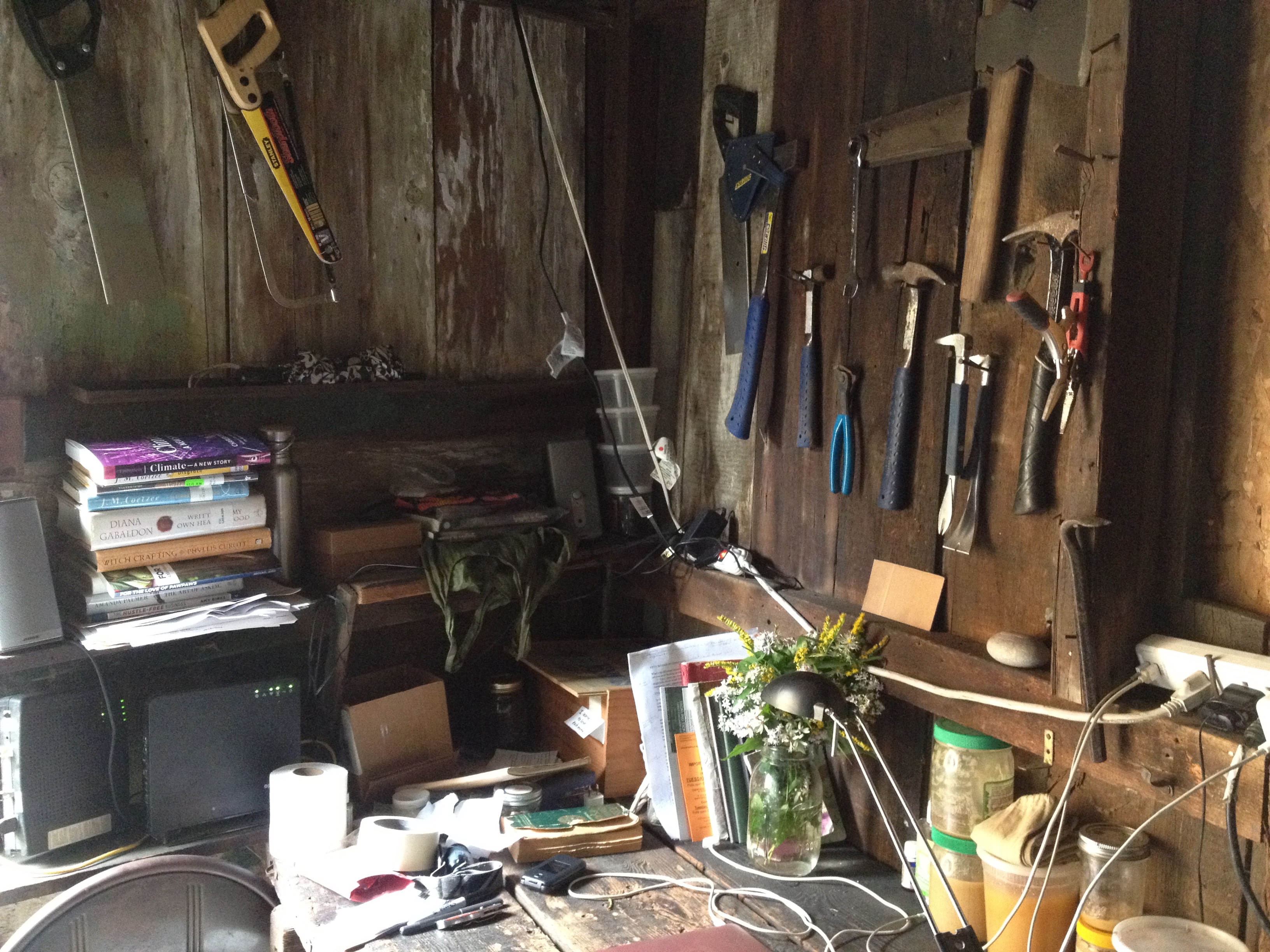 At first, she thought the tools didn’t belong in her writing area (which double, tripled, quadrupled, quintupled as her bathroom, dining table, charging station, ancestor altar, art studio, and so on). After all, she hadn’t put them there—she simply hadn’t bothered to remove them. Once she’d wiped the blackened boards of the ancient workbench a couple dozen times (stopping not because she’d gotten them clean but because she doubted she ever would, and anyhow she still had two lofts and a makeshift kitchen counter to tackle), she called her efforts good enough, and started stocking the edges and narrow ledges with notebooks, library books, folders, pens, pencils, sharpener, scissors, stapler, her chocolate supply, her special handcrafted chocolate bowl, her jars of tahini and honey, her ramekin and favored spoon. She let the saws, the hammers, the pliers, the cat’s claw, the pry bar stay where they were, for the moment, figuring she’d move them later.

They weren’t in the way, per se. Each tool had its own nail, and occupied mostly vertical space.

But then one evening, when she stepped away from her desk, and then stepped back, she saw it in a new light: not as a workbench pressed into service for writing, but as a shop for building sentences. Paragraphs. Essays. Chapters. Books. Stories. She was no less a workman than the carpenters, tilers, floor refinishers, insulators, welders, masons, gutter installers, concrete pourers, plumbers, electricians, and landscapers who’d been laboring, over the past few years, to reconstruct the house just up the hill from this temporary shed-home, the house she and her husband would move into—she prayed—before long.

She, too, saw past the skin to the innards, the skeletons, the nerves, the vessels, the tissues of things that registered to others as blocks of stubborn mystery. She, too, gutted structures—houses made of words—and lovingly rebuilt them, for beauty and strength.

No, she did not risk, at her work, the varieties of bodily harm the men might sustain, as they hauled heavy boards, climbed stairs without rails, lugged cast-iron clawfoot tubs from van to porch to bathroom. No, she was not rubbing calves with the toxic goop of an oil well, or navigating the diabolical fug of an assembly line for asphalt shingles. But she was, each day, turning thoughts—wisps, ideas—into words. Making them manifest. And she—like the city buildings department, like the Highland warrior, like the medieval journeyman—had a code. She did not send sentences out into the world limbless, or squeaking, or covered in sores. She did not erect sentences that were unsound, sentences that would collapse when diagrammed. Rather, she gave each sentence strong bones. Supple tendons. Taut muscles. She gave each story a solid opening. A clear plot. A coherent throughline. And she tended, as well, to each text’s rhythm. Beauty. Music. When applicable—when the air spirit moved her—she added poetry. A balletic twist. A turn of phrase that might induce the reader to linger, or cry, or laugh silently to herself.

Yes, she had a code. It governed her work. It lived inside her. It overlapped with, but did not map exactly onto, The Chicago Manual of Style. It guided her as she wrote, revised, edited, smoothed, and proofread. It applied, no matter whose words she’d started with or whose name would appear in the byline. She would honor it, every page of her life. This, she knew, was her sacred trust.

One Response to “To Build a Sentence”