When It Sobs, It Sings: A Review of SANCTION (Volume I) 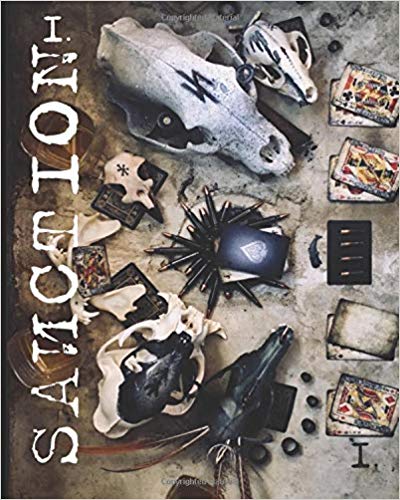 I don’t re-read books, as a rule—but I am now re-reading Sanction (Volume I), by Roman McClay.

Let me tell you a story.

In 1994, when I was a freshman at Harvard, my mother gave me a copy of a book—published by The Subway and Elevated Press Company (and featuring a shout-out to my one and only cousin)—called Bomb the Suburbs. A slim volume, by graffiti artist and hip-hopper William Upski Wimsatt, with a title scrawled in black marker on a yellow and black background, it features a note, on its back cover, explaining “why you should read this long-ass shit.” That is, it proudly eschews the imprimatur of a plush corporate player, and, inside, boasts the aesthetic of a zinester relying for layout on scissors, glue, and a copy machine. However: this book rocked my world (which is why I’m still talking about it, twenty-five years later). Not only did it explode my understanding of what a Euro-descended, college-tracked young person could do with his or her life, but it also exploded my notions of what a book could be. In a mad mash-up of essay, opinion, memoir, and poetry, Upski drives right for the meat of each tale, eschewing niceties like transitions and context. It’s as if he knows your soul is starving, and is determined to cram it with some seriously dense nutrition right now.

Sanction, in some ways, is nothing like Bomb the Suburbs: it tells a single (if labyrinthine) tale, in a consistent voice, and is anything but slim. However, it too has exploded not only my understanding of what matters—and what the cosmos and I are up to—but also my perception, once again, of what a book can be. To wit: Sanction puts honesty first; risks extended stays in characters’ roach-ridden and cathedral-ceilinged minds; hazards a wild tangle of guesses at the purpose of life, the universe, and everything; and flings anthrax-tipped barbs at every cow held sacred by liberals still mourning what they see as the tragic events of November 9, 2016.

During my first reading, I found myself captivated by Sanction’s sheer energy: whereas most books require me to slog through loads of setup, for the sake of the closing payoff, this one ignites a mental conflagration, like, every five minutes. Around each metaphorical bend I found some shocker of an idea, some twist of events, that made me re-examine everything I thought I knew about the characters, my worldview, et cetera. Plus, I trusted that the story—despite its frequent jumps among times and places—was going somewhere.

The highest compliment I can pay a book is this: it rearranged my reasons to live, i.e., caused radical shifts in my governing story. Reading Sanction, I noticed those shifts coming for me, in abundance. For example: I started reconsidering “diversity,” and tribalism, in light of my understanding that humans (this one, in particular) are not adapted to frequent interaction with strangers. And I began to see my husband, and how I relate to him, in a new light.

In addition, I was caught by the author’s—and his characters’—exploration of honesty, and values, and what it means to be honorable. That is, I was constantly translating the book’s deep concern with what is right into new suppositions about how I ought to act, and how the world ought to operate. This was fun; forming and vetting such hypotheses is one of my favorite pastimes.

After I’d finished Sanction, and started reading it a second time, a friend asked what genre it belonged to. I said I guessed it was science fiction, but it didn’t feel like science fiction—it felt real. Why? Perhaps because past, present, and future are so tightly woven together, and because all that’s futuristic has such strong antecedents in the now. Perhaps also because the characters—even the AIs—are rendered with a degree of emotional intimacy that makes them hard to relegate to the “alien” realm.

I’ll admit, I’ve been fearful of owning—in writing, in public—my admiration for and fascination with this book. Why? Because most people I know are liberals, who might well pillory me for so much as touching a book that rips the lid off the maggot-bin of racism, and sticks up for the regenerative power of man-to-man violence. I, however, am not a liberal—or a conservative, as neither Left nor Right can be trusted with air, water, soil, or relationships, never mind healing, or kinship, or joy. So I’m always digging beneath the surface for ideas and thoughts and stories that at least acknowledge, though they may not in the near term meet, my and my fellowbeings’ deepest needs.

In his poem “The Great Wagon,” Rumi said, “Out beyond ideas of wrongdoing and rightdoing / there is a field. I’ll meet you there.” Sanction, and the yearning it answers, lurk in the soil beneath the political pavement, from which plants that are determined enough (like lamb’s quarters) can draw water, food, and reverence for miracles. No politician, no political program, addresses the question of how to have a good moment— how to treasure what or who is here now, and grace it with our full attention. Politics can’t handle tears, or mystery.

Sanction, in my mind’s eye, is a great big throbbing heart, beneath a mound of soil sprouting weeds to shield the skin of a hurting beast who howls and shouts and thrashes, each beat matters. It claws the dirt in fury—and when it sobs it sings.

The writer and shaman Martín Prechtel, who spent twelve years in a Mayan village in Guatemala, talks about the charge of “keeping life alive,” i.e., taking nothing for granted and, instead, constantly nourishing the web of life with offerings of prayer and beauty. Perhaps Sanction is such an offering, calling those whose hearts would burst not just through dirt, but concrete.

[To order Sanction, go here and click “Buy the Book”; for info about Mating in Captivity, my memoir of five years in a cult, go here.]

8 Responses to “When It Sobs, It Sings: A Review of SANCTION (Volume I)”