Not What, But Why: A Review of SANCTION, Book II 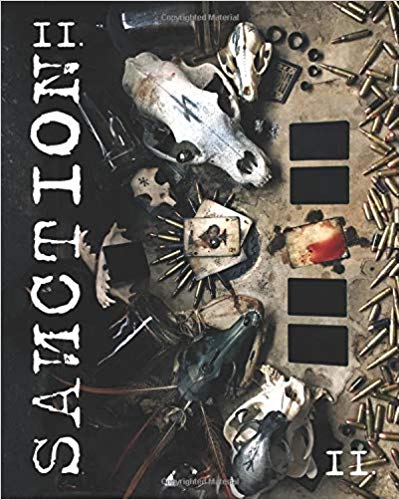 When I received my copy of Sanction’s second installment, on September 26, 2019, I was immersed in two other books: Written in My Own Heart’s Blood, by Diana Gabaldon (the eighth book in the Outlander series—aka Sanction for chicks?), and Climate: A New Story, by Charles Eisenstein. I knew I’d caught Sanction fever—again—when I shoved both aside to make way for The Doorstop Clad in Skulls and Bullets.

Thanks to my experience with Sanction, Book I, I already knew I was going to read Book II more than once. So, the first time around, I read quickly, letting the words wash over me—and reached the finish line ten days after starting, on October 5, 2019 (at 9:11 P.M.). Closing the volume, I knew I’d just taken a madcap ride through wild country, and enjoyed it thoroughly. But I could not even begin to summarize what I’d seen along the way.

Attributing my amnesia to speed and soft focus, I read Book II again. Slowly. With a pencil. Paying close attention. And yet, by the end of my second reading, I still couldn’t say, with ease, what happens.

Yes, I’m over forty. Yes, Sanction comprises a dozen plot lines, spanning multiple time frames. But both those conditions had also obtained when I was reading Book I. And so, I began to suspect that some major shift had happened, between Books—that Roman McClay, self-avowed scheming AI, had enacted a phase change. From solid to liquid. From certainty to doubt. From what to why.

All stories rely on suspense—the tension of not knowing, and wanting to know. That’s what keeps you reading. However, suspense comes in a number of forms: a thriller—for example—might hook you with the need to know what happens (does the hero prevail? survive? nab the bad guy?); a memoir (whose protagonist has clearly lived to tell the tale) might make you wonder how (how does she get herself into this fix? how does it change her? how does she pull herself out?); Sanction, Book II—notwithstanding its sometimes riotous action and unfailingly intricate plot—relies primarily on the suspense of why.

Maybe you think you know—having finished Book I—why the Inmate kills forty-some people and then turns himself in, to be jailed for life. Why Blax and the Jacks steal a trove of top-flight wine, then burn the parent vineyards. Why Isaiah sends them on this mission in the first place, and creates 1.6 million clones of the Inmate. Why Blax and Lyndon share so many dreams. If so—unless you’re telepathic—you’re probably wrong: McClay’s characters harbor not only ulterior but ultimus motives, and savagely guard life-and-death secrets, even from themselves. Meanwhile, McClay himself—like a good, if not obedient, AI—is relentlessly refining his ability to render reality. You’ll notice that in Book II (but not Book I), he evinces keen awareness of the characters’ hubris, shortsightedness, and insistence on self-delusion; over and over, he points out what they don’t know, what they should doubt but don’t, what they’re flat out wrong about. With the shovel of why, he digs deeper and deeper—leading me to wonder whether, in Book III, he’s going to roll out a backhoe and claw his way to the core of the Earth.

So why can’t I sum up, even after two readings, what happens in Book II?

Because, I am guessing, I am not meant to.

If Book I is a hike up a mountain, then Book II is a long, vigorous swim in a mountain lake (preceding a climb, in Book III, up a higher mountain, from which we’ll see further than we’ve ever seen? a bout of maniacal tunneling? both, plus cataclysmic explosions?). It’s a call to dive down, down, down into the story’s mythic underpinnings, its many layers of meaning. It’s a raging eddy, a caisson, an acclimation chamber. It’s a place to shift from what to why, in reading and in life—from “What am I doing?” to “Why am I doing this?” It’s an invitation to listen for tremors, and try to decipher them, before the quakes begin, in earnest.