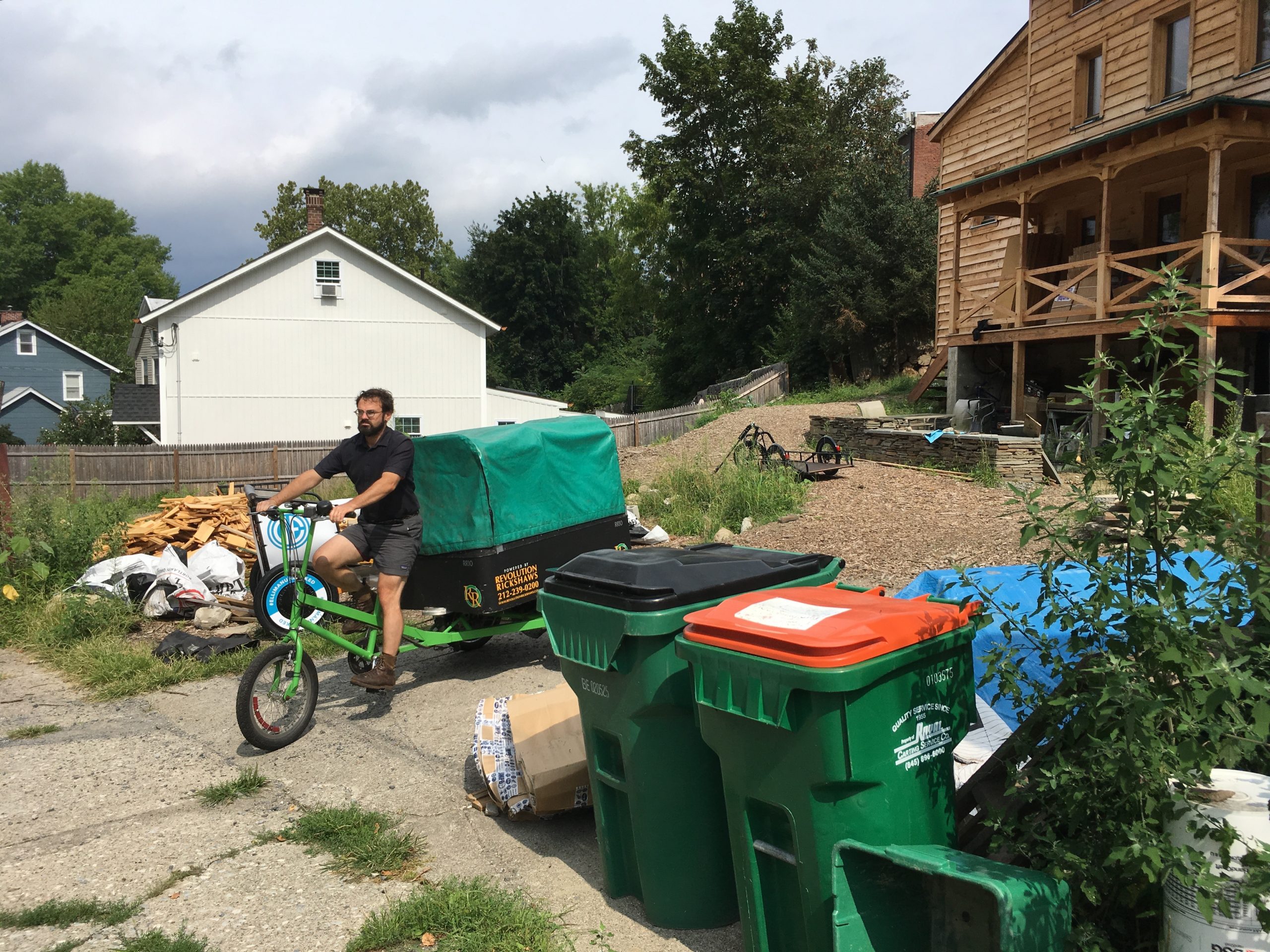 [This is my November column for Livelihood magazine, which recently appeared in print and may eventually show up on the Livelihood website. Enjoy!]

It’s Friday morning. I step out the front door of my house and climb the bluestone steps up to East Main Street, to check the Gift Library for new offerings. Sure enough, I spot a few freshly filled-out cards in the “Offers” slot, ready to be tacked to the roofed bulletin board. And I notice, while tacking, that a number of the cards I posted earlier in the week have disappeared. Great! I think. That means one of my neighbors is learning to build a kitchen cabinet, another is all set for sauce apples, and a third is getting advice on how to slow, spread, and sink the water on her land. I can feel the well of gratitude filling right now!

Next, I check to see if my next-door neighbor has remembered to set out her purple poop bucket. Once upon a time, Royal Carting roared through our neighborhood, each Friday, to pick up trash and recycling—but nowadays we no longer need that, since everything we use is either truly compostable (meaning, it will decay in a backyard heap, not just an industrial facility), or eminently repairable, or fully reusable (no more monstrous hybrids!).

Poop, however, presents a special problem—many would prefer not to compost that, but, with the sewage plant shut down, everyone has to. Fortunately, a couple local companies have sprung up to meet this need; my neighbor’s chosen provider, Poopedalers, retrieves full buckets, once a week, via heavy-duty pickup trike, while dropping off empty buckets (sanitized by the sun!) and fresh supplies of sawdust.

I would, of course, enthusiastically patronize this company as well, except that, more than a decade earlier, my husband and I made the super expensive—yet prescient!—decision to install a multi-level, state of the art Phoenix composting toilet in our house, during a grueling gut renovation. This means we do our own poop-posting, and keep that fertility on site.

Hearing the bump of tires on brick, I look up. There’s the Poopedaler right now! I smile and wave—he’s buddies with my husband, who’s been triking himself for nearly thirty years—then head over to where he’s parked to point out the ripe raspberries dripping off the bush just a few feet from him, in the middle of the street. I know it’s not the best idea to pick fruit while handling poop buckets, but I also know how much he loves raspberries—and if I make the introduction now, he can always come back and graze later.

Wow, I think, I sure don’t miss pavement! I’ll take fruit and brick over trucks and toxic icing any day.

I recall calculating, back when I lived in Brooklyn, that New York City could reclaim eight thousand-plus acres of growing space, simply by decommissioning its four million or so parking spots—and thousands more by depaving and narrowing to ten feet its six thousand miles of roadway (ten feet is the minimum width for a two-way bike lane). I’m thrilled that this vision has come to fruition here in Beacon, where asphalt—as well as every other product derived from the fractional distillation of petroleum—was banned by the City Council back in 2025. Yes, all the vinyl siding and plywood and beaver board got grandfathered in—the city wasn’t going to make citizens tear their houses down and rebuild—but, thanks to a comprehensive accounting of the true costs of operating motor vehicles, and building and maintaining the necessary infrastructure, the public voted, in a referendum, to go ahead and replace the toxic icing with good old-fashioned brick.

Of course, it didn’t hurt that the law mandating a Universal Basic Income had just passed the legislature the year before. That meant that no one had to commute to a job in the city, or otherwise motor about in quest of Federal Reserve Notes, if she didn’t want to. And, with motor vehicles consigned to Fishkill, Cold Spring, or the junkyard, walking and biking became eight times safer and easier. I’m not the only one who gets a kick out of the counter on Main Street that tracks how many years it’s been since the last traffic collision.

Having pointed out the raspberries to the Poopedaler, I head back to my front door. On the porch, I pause to sniff the Beacon flag—made of locally grown organic hemp—that’s replaced the nylon New York State flag I never liked anyway. Yes, it still smells like sun-shriveled figs—sans toxic icing.